We will start our journey at STOP #9, on the corner of Spring at Bourke. Hop off here and head straight to the Imperial Hotel, which according to the gang at www.parmadaze.com, has the best parma in town. They recently just improved their chips as well (beer battered)! It’s true, just like Kenny Roger’s Chicken, they make a mean bird. They are also open at crazy hours to appease U.S. sports fans. 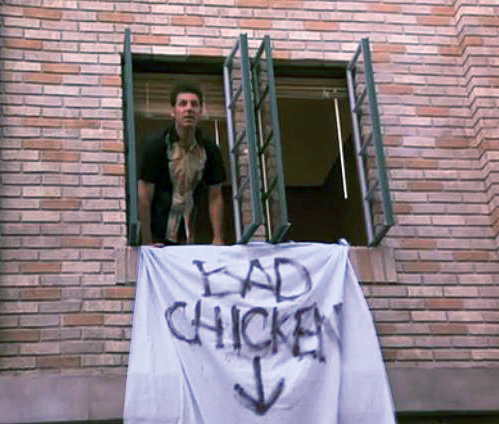 The Imperial make a mean parma.

You could then hop back on to Stop #12. At Catfish it's all about quality craft beer, live bands and Philly cheesesteaks. Their Monday nights go off!

Stop #13, on the corner of Gertrude is the Worker’s Club. We knew it better when it was the Rob Roy, and in fact woke up a few times upstairs, when it was a hostel. Today they get the balance right between band venue and decent eating option. Head there on a Monday for their Mexican special.

You’ll be spoiled for choice at Stop #14, on the corner of Napier. On one side is the severely underrated Wilde Bar. Their UK inspired menu as well as crazy happy hours on their craft beer pints was one of the reasons it finished Number 14 in our 2014 Top 50 pubs in Melbourne. Their outdoor seating on the street is a great place to play hipster bingo.

Across the road is the family run Gertrude Hotel, which despite a few false starts along the way, has firmly established themselves as a craft beer destination. They made it to number 10 in our Top 50 pubs in Melbourne last year. We, and many ACU students, like to go there on Thursdays for their $7 pint specials. Opposite is the well regarded Everleigh Bar, but there is more chance of me watching A-league, then this place having specials. Good for dates though...but go dutch.

Stop #15 will lead you directly to the Fitzroy Beer Garden. I’d ignore the Builder’s Arms up the road, as they have really deviated from being a great local, despite their initial press release saying they wouldn’t. The Fitzroy Beer Garden have had a bit of a facelift since the Funf days, but still have the awesome Wednesday parma deal that's is repeated on Sundays (as well as other specials). Certainly one of fav beer gardens in town.

The 86 Tram heading down Smith St

New on the scene is Mr Scruffs near the corner of Smith and Gertrude, which has some awesome food specials, including a burger that is better than their much more heralded neighbour. Nearby is the newly opened huge space of Foresters, which has a nice little happy hour.

Just across the road, you’ll hit our first eating stop at Smith St Kebabs. Now they aren’t the best, but the price may be right for some ($5.95). Just a few metres up you’ll have Huxtaburger and Pashes, which are two good options. Have a quick stop at Caz Reitop's Dirty Secrets as well. This place has been kicking above their weight for years and has an awesome basement space.

Stop #16 on the corner of Peel st, will drop you off at the Grace Darling Hotel. We’ve had a love hate relationship with this place, but it’s specials are some of the city’s best, which is why it was ranked number 26 in our Top 50. Across the road is Grumpy’s Green which has new owners, but has still kept focus on solid specials and live bands.

Stop #19 on the corner of Johnson, you’ll find the newly renovated Birmingham Hotel. This place has never been one of our go-to pubs but they do have some pretty handy food specials. For a family friendly environment be sure to head to Punter’s Palace, and say hello from us.

The Punter's Palace is an ideal stop for the whole family.

The Robert Burns Hotel and its yum yum for the tum Spanish cuisine at stop #20. It’s a great spot for an express lunch or a paella dinner. A short walk brings you to the recently re-opened Gasometer Hotel, which is kicking goals in the live music stakes. Sit on the bar stool, cos they are the comfiest in town. Head there on a Wednesday for their mixed grill nights.

At stop #23 you’ll find the Clifton Hill Brew Pub, which just started serving their own beers. We had a seafood platter here and it was bloody good. Their Friday happy hour is also a killer.

Stop #25 is the last, and fitting, as the Terminus has become a great place to discover craft beerand just this week started a weekday happy hour.

We should probably tell you to swipe your Myki at this point too.