The Rooftops - "I can see my dentist from up here"

Rising above the city streets, the Imperial Hotel’s rooftop looks over Parliament House (we like to call it the ALP's cubby house) and is popular with people who have little choice of what they wear to work. The Clyde in Carlton built their rooftop beer garden mid-year, and during the football season project games on the a nearby wall across the lane. The Fox in Collingwood has a cracking happy hour with bumpy views of historic chimneys, and if in you’re in the mood for tunes too, nothing beats the The Labour in Vain on Brunswick St. If the backstreets is more your scene the Union Club's rooftop will fit the bill nicely, that bill being cheaper on Mon, Thur and Fridays. In Richmond, the Corner and Richmond Club Hotel are great for groups and has got us thinking about doing a rooftop pub crawl. 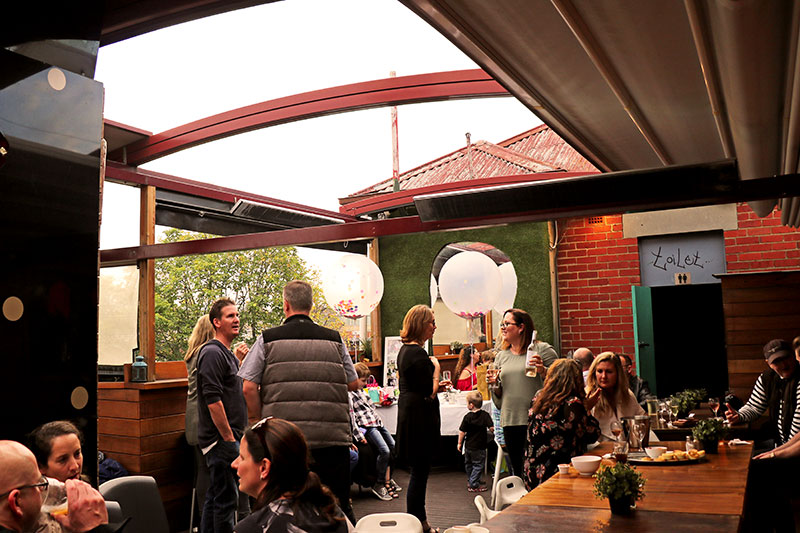 The Backyards - "Didn't I used to live here?"

The Edinburgh Castle is our favourite pub in Brunswick, and that’s saying something because there are a lot of them! It’s beer garden comes with its own ping pong table and lots of board games so what’s not to love. Just down the road the Retreat is full of stages, a huge tree that provides cover and a handy outside bar. Pity the toilet is far away though. Tiny in size, Trumpy’s Bar in Thornbury has three communal tables where strangers often become friends sipping down $4 schooners. Across the road, the Thornbury Local is just as snug and inviting. On the same street the Peacock Hotel’s outside area is simply huge and catches the afternoon sun, in a way you’ll contemplate quitting your job, or am I just projecting. In Abbotsford, the Park Hotel is quickly turning into one of our favourite pubs, joining the nearby Yarra Hotel. For sports fans, bow down to the Great Northern, that has no peers. The Town Hall Hotel in North Melbourne is a cracking space too. Down south we love the Windsor Castle and the College Lawn. Different type of crowds but equally good outdoor spaces.

Sitting on the Street – "Stop watching me, watching you"

We call it the Sunday triangle where people get lost for hours. The Tramway, Brandon Hotel and Lord Newry in Nth Fitz/Carlton are all walking distance from one and other, and have street tables to take advantage of their specials. Up the road the Redwood Tasting Room has a few tables, the cheapest take-away beers in town and a very worthy happy hour. The Dan O'Connell is located right on the bike path, where about 15,000 cyclists that are healthier than you pass by during happy hour. Or you could join the hipsters at the Grace Darling Hotel, during the week for their excellent beer specials. The Prince Public Bar is the best place to people watch in St Kilda by far, equally people-watch-friendly (look I invented a word!) is the Munich Brauhaus by the yarra. The Mona Castle and their three street tables out west in Seddon, is the quintessential backstreet pub. Finally the people you sit next to outside of The Drunken Poet (our number one venue for 2017/2018) might just become life long friends.